Virtual reality may seem like a hobby reserved for hardcore gamers, but it still makes it pretty easy to wath 3D movies at home if you get the enough 3D resources. Suppose that you have a 3D VR heasdet like Gear VR, Oculus Rift, VR One, Google Cardboard, etc. and want to search for the top VR Video Converter, it's very important and useful to understand how virtual reality video conversion works, and which 3D movie converter for VR headsets give you the best results. Check out the review below. 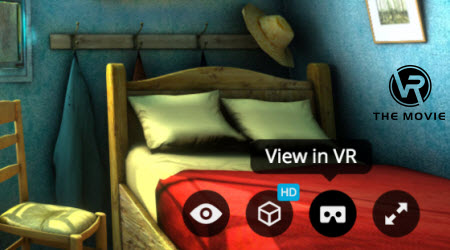 Why do we need the Top VR Video Converter?

The why is very simple. You bought a 3D VR heasdet, NOT a personal computer. Supporting certain formats and bit rates may require extensive processing power (not available by your VR heasdet/phone's video processor). With an increasing number of formats in video being distributed as downloadable content online, you've probably found that the video you have right now isn't compatible with VR heasdet. That's where virtual reality video conversion comes.

What you can do: Get a transcoder and convert all your non-VR video files to a VR SBS format supported by VR heasdet, change a VR video format/resolution to be available to VR Players, or transcode a virtual reality SBS video to 2D normal format for playback on PC/Mac, iPhone, iPad, Android, etc.

How do we review 3D Movie Converter for VR heasdet?

First of all, we have strictly scaned and reviewed all the 3D Video Converter Software with BitDefender Total Security and IObit Security 360, they all pass the test without any spyware and viruses warning, so you can download and use them safely, they will not ruin your computer at all. There are huge amount of VR Video Converters on the market. Before you choose one, you ought to consider the overall quality of the product and choose the best one for you.

The criteria to rank the 3D Video Converter Software are as follow:

Stability - After cyclic test we are sure that the software need to be very stable, without any operating trouble or defeat during the 2D to 3D and 3D to 3D Conversion as long as your computer is OK.

Main Function - The top 3D Movie Converter for VR heasdet should be extremely easy-to-use thanks to its friendly UI, just a few clicks is enough to finish your conversion. And you can even finish the virtual reality conversion totally by yourself without any guides.

Converting Speed - If you pay attention to this point, the best 3D VR Video Conveter need to be relatively fast compared to similar 3D products

Easy to Use - Creating a 3D SBS video shouldn't be so difficult, frustrating or extremely time-consuming. And with an intuitive interface, it will be simple to navigate and a minimal learning curve so you can make a playable SBS VR video in a timely manner.

Support - The 3D Video Converter software you choose should be complemented with comprehensive help and support options that can assist you if questions or technical issues arise as you are using the application. Direct support via email or telephone should be provided along with useful online resources such as FAQs and product tutorials or user guides.

Pavtube Video Converter Ultimate is another of those sprightly video converters you'll probably miss because it sounds too good to be true. Users have reported consistent success with this converter when they tried to convert videos for VR headests. With it, you can convert all kinds of normal videos, including AVI, WMV, MP4, MKV, FLV, 3GP, RM, RMVB, VOB, etc. to 3D with ultrafast speed, for truetheater entertainment at home.

ImTOO 3D Movie Converter is another 3D video converter for VR headsets. It supports converting videos from 2D to 3D, even 3D to 2D, as well as convert one kind of 3D format to another. It is a simple software to use.

You can download a free trial to try the above video tools to do a test now!

1. Install the desired video converter
2. Then you add the video files you want to convert. Most converters detect video files of almost all formats.
3. Once you're done adding the video files, the next step takes you to the conversion format page: simply put, select 3D Video format/modes or the device for which you want the video to be converted. In our case, 3D SBS video is highly recommended for perfectly playing on Gear VR, Oculus Rift, VR One, Google Cardboard, etc.

Now, just proceed and let the conversion happen. Once done, you can use the file in VR headset with VR player on your smartphone. Voila! See more details in this Video Converter Ultimate tutorial. This is the top method of converting to/from Virtual Reality Videos.

HMD-Video-Converter: It can also convert 2D- and 3D-videos from and to videos watchable with Head Mounted Displays. But currently only the Oculus Rift DK1 is supported.

Compatible input- and output-formats are:

WHAT DO YOU NEED:

2.The 3D Stereoscopic videos: you can choose all your favoutite 2D/3D movies in right format for VR headsets.

3. Use Capture software: in the guide video I was using "Fraps"

4. Now you can save to your smarphone and use your own Google Cardboard or compatible to watch your personal theatre.

It's high time for us to enrich our VR video library. But where to find virtual reality video to download then? Here we list VR content sites from which we can download VR video free for Gear VR, 360 VR video player.

YouTube is the largest VR 360 video download site we can turn to. And now, users are provided with opportunity to live stream or download 360-degree VR video in 3D with "spatial audio" using 360 VR video downloader tool.

FaceBook is the next big virtual video site looming larger. We will see more Virtual Reality video for downloading on FaceBook the next a few months.