Let's face it: The new year has got to be brighter for the world's largest tech firm, right? The previous year saw more new product introductions than ever from Apple, including iOS 9, iPhone 6s/6s Plus, iPad Pro, Apple Watch, iMac 4K, Apple TV 4, etc. Then what to expect from Apple in 2016? Will the Apple TV make a strong showing this holiday season? Will the iPad Pro be enough to reverse the iPad line's recent sales slump? If you are curious about them, read the following Apple Products 2016 Preview, including new iPhone(iPhone 7/Plus/6c), new MacBook Air/Pro, Apple Watch 2, iPad Air 3, iMac, iOS 10, etc. 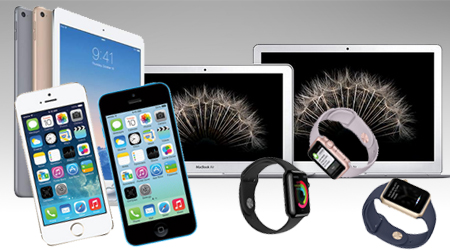 Since 2015 was an "S year," 2016's iPhone should see a redesigned case, and a big selling point or two that would compel as many upgrades as possible. We think the iPhone 7 will feature further refinements that work on some pain points—wireless charging, haptic feedback for the software keyboard, and perhaps a camera that shoots 3D video. Waterproof would be a nice touch, along with better battery life, even if it can't be the thinnest phone ever. The future Apple product 2016 may also have USB Type C, A10 processor, 5MP front camera, 12MP rear camera and run iOS 10.

Analyst Ming-Chi Kuo, who often accurately predicts Apple's plans, has said RAM could be a differentiating factor between the two iPhone 7 models. The smaller 4.7-inch iPhone 7 may continue to ship with 2GB RAM, while the larger 5.5-inch iPhone 7 Plus may ship with 3GB RAM.

Rumors indicate Apple is still planning to launch a new 4-inch iPhone in 2016 which has been referred to in the press as the iPhone 6c As a lower-priced device. Without 3D Touch or the top-notch camera of the flagship iPhones, the iPhone 6c would still make a splash with a colored metal case, Touch ID (gotta get more people using Apple Pay, after all), and the fun pocket-friendly size people have been asking for since the iPhone 5s. Small, medium, and large are the pattern for a reason, and Apple's big phones haven't captured everyone's hearts, so this is a rumor we believe in.

Rumors claimed that iPad Air 3 will sport a 9.7 inch screen display with 4K resolution or 2334×3112 resolution. This is better than the predecessor's 1536×2048 pixel resolution. Other expected features and specs of the device are A9X processor, 2GB to 4GB RAM, improved cameras, fingerprint sensor, and longer battery life. The iPad Air 3 is speculated to focus on entertainment and media functions making it superior than iPad Pro. Amid the speculations of the powerful specs and features of the iPad Air 3, the tablet is rumored to be way cheaper than the new iPad Pro. Recent rumors have suggested that Apple is developing an iPad Air 3 that will launch during the first half of 2016.

Current rumors suggest Apple will continue producing the MacBook Air, with plans to launch 13 and 15-inch MacBook Air models during the third quarter of 2016, perhaps unveiling the machines around the annual Worldwide Developers Conference.

Beyond Skylake chips, it is not known what other improvements Apple might offer in a second-generation Retina MacBook. Given that the design was just introduced in April of 2015, the new machine will undoubtedly use the same chassis, but a Rose Gold color option to match the new Rose Gold iPhone 6s is a possibility. If Apple is planning to introduce new Macs at a rumored Apple Watch-centric event in March, that may be when the new Retina MacBook will debut.

There are no rumors on other features that could be included with a next-generation iMac update, but going forward, Apple may fully drop non-Retina 21.5-inch models as hardware prices come down in favor of an all-Retina lineup.

Because iOS 9 just launched three and a half months ago, iOS 10 rumors have not yet begun. As the year progresses, we'll get a glimpse at what to expect in September, but for now, all we know is that there's an update coming.

New versions of the iPhone ship with new versions of iOS, so it's logical to expect the same thing to happen with the Apple Watch, but thus far there are no rumors about the watchOS 3 update or what features might be included.

If Apple is planning to offer iOS-style updates for tvOS, the first major tvOS software update could come in the fall, perhaps alongside iOS 10.

There are other possibilities like fifth-generation Apple TV, iPad Pro 2, iPad mini 5, Mac Pro, Mac mini, etc. And which one do you want to buy? I bet you may have a rough decision now.

Surely we considered the unique features of the new Apple products, we can use your iPhone 7, iPad Air 3, Apple MacBook Pro/Air 2016 to watch favorite movies offline, record 1080p or 4K videos for editing, playing or sharing, or put them onto your VR headsets like Google Cardboard, VR One, Merge VR Goggles for enjoying 3D movies, but do not forget the common issues whether your device is compatible to common audio video formats like MP4, MOV, MKV, AVI, MP3, AAC, 4K UHD, 1080P, 720P HD etc. It's inevitable that you may give up something can be improved or less important when coming across the critical points.

Luckily, if you go after for other salient features of your Apple phones or tablets, you are still be able to play music/videos in any formats with the help of iFastime Video Converter Ultimate, which could help you convert Blu-rays, DVDs, HD or SD videos or movies to MP4 or directly iPhone 7/plus, iPad Air 3, new MacBook Air/Pro, iPad Air 3, iMac and other top phones or tablets in 2016 with no quality loss. To show salute to high tech mobile world, iFastime offers 20% OFF discount on Facebook at this new year season.