Home Blog Oculus Rift vs. Samsung Gear VR, Who Will Be the Winner?

Oculus Rift vs. Samsung Gear VR, Who Will Be the Winner?

It's that VR is happening right in front of our faces, and it's happening fast. Oculus Rift is set to hit in the first quarter of next year, while Samsung is shipping another, more affordable Gear VR headset clearly targeting the masses. Though these devices were contrived with two very different audiences in mind, we nonetheless thought it would be fun to compare the two in a savage battle for the Metaverse! What we present here is a full specs analyses of "Oculus Rift vs. Samsung Gear VR", helping you to make you decision. Let's find them out. 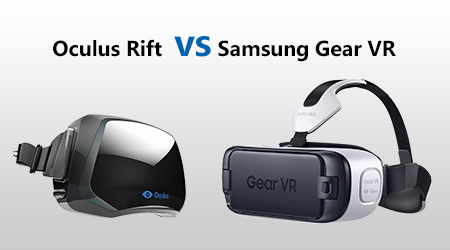 While neither option is going to blow you away in terms of style, appearance-wise, Samsung has Oculus beat with its Gear VR headset. There's no denying how trendy this thing looks, even if the whole concept of fashionable VR is completely foreign to us right now. At least on the exterior, it's the perfect complement to Samsung's mobile devices, which is an appreciated touch considering it works so closely in conjunction with the Galaxy Note 5 and the trio of Galaxy S6 handsets.

On the other end of the spectrum, the Oculus Rift's appearance isn't exactly subtle. Though the final design we see below has iterated significantly on the previous dev kit's design and certainly bears a more pleasing aesthetic than the one before that, it's still hard to ignore how bulky it looks, even if it does promise a weight under 380 grams.
The matte finish might serve better than the Gear VR at resisting scratches, but it doesn't save the Oculus from the uncomfortable stares you'll assuredly get while donning the display.

Performance-wise, the Oculus and Gear VR are two different beasts. The Oculus is a clearcut winner here, offering up two integrated OLED displays, bolstered by an accumulated 2160 x 1200 pixel crystal clear image and buttery smooth 90Hz refresh rate. While the Gear VR presents a fair challenge to the Rift in terms of resolution, as you can imagine, an Ultra HD image exhibited from a 6-inch smartphone will likely pale in comparison, and graphics performance is limited by smartphone hardware.

The software catalogue, as you can imagine, is much more capable of delivering familiar content on the Rift. While Gear VR is host to some assuredly innovative indie offerings, games like House of Languages and Blind Swordsman aren't exactly household names. No, the more well-known software rests in the hands of the Rift.

This one's up to personal preference mostly, but I'm more interested in the prospect of the Rift to go back and play games like Half-Life 2 and Dying Light with an immersive new atmosphere as opposed to a few select glorified mobile games.

News on pricing information for the Rift has been sparse. In the past six months or so, we've heard everything from "$1,500 or cheaper" with the purchase of a PC to "at least $300," according to PC Gamer. The Gear VR, on the other hand, is affordable for anyone with one of the compatible Galaxy smartphones at $99. Sure, for under 100 bucks you aren't guaranteed the same level of immersion as you'd expect with the Rift, but it's a nifty, low-cost sample of the future. And you don't have to know the first thing about PC specs in order to use one.

Certainly, figuring out Oculus Rift vs. Samsung Gear VR supported video/audio file formats is the best way to get out of video format compatibility issues, together with converting videos to VR headests video formats with a video converter for fluent playback.

If you have problems playing back files such as .MKV. You may also need to install a CODEC pack. I would recommend the CCCP Codec pack (It may have a Russian name but this should cover your CODEC needs and has no spam)

If you decide to convert all your video collections (SD, HD and 4K UHD) to Oculus Rift/Samsung Gear VR and maintain the original high quality in the meantime, iFastime Video Converter Ultimate would be your assistant.

Here is the way to go for Blu-ray, DVD and 3D Movie experience

The Oculus Rift and Gear VR both deliver on almost paradoxical fronts. While Oculus brings the power of PC gaming to a head-mounted virtual reality display, Gear VR serves as a convenient introductory point for anyone only casually interested in this emerging tech. Especially in reference to pricing, much of Oculus Rift's features remain ambiguous.

Considering both peripherals bear some sense of innovation, although in antithetical ways, making a decision on which is objectively "better" isn't really needed this time around. They're both powered by the same company (Gear VR is designed in conjunction with Oculus) and are both sure to evoke their fair share of buzz by the time their respective release dates roll around.

I suppose in that sense, everybody wins.

Have more questions about Oculus Rift vs. Samsung Gear VR comparison, please feel free to contact us>> or leave a message at Facebook.

3 thoughts on “Oculus Rift vs. Samsung Gear VR, Who Will Be the Winner?”