Imagine a world without limitations. With ZEISS VR One, the smartphone you carry in your pocket can take you to worlds of virtual and augmented reality. You can simply download and launch the apps available for mobile VR devices, lock your smartphone in the VR ONE precision tray and slide it in the VR ONE for amazing movie experience. As a disc lover, ever thought of getting your 3D Blu-ray collections to VR One for watching, on one hand, instead of going to the cinema, on other hand, to get rid of the trouble with placing them in Blu-ray player and even avoid considering the region codes of commercial BDs? In this page, we give you the easy solution to watch 3D Blu-ray with VR One in VR One Cinema. 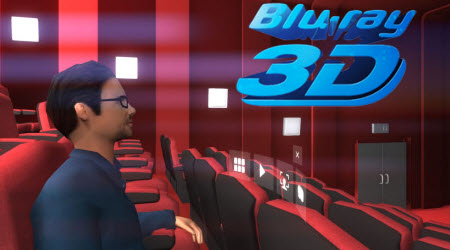 It's important to know that VR ONE Cinema app supports 3D movies in side-by-side format. However VR One goes without 3D Blu-ray technology involved. To work this out, the only route is to rip 3D Blu-rays to VR One supported file type.

In fact, with the right program, you can get all done easily and quickly. Here iFastime Video Converter Ultimate is the best choice of converting 3D Blu-rays for ZEISS VR One. The program is easy to use and can help you rip 3D Blu-rays, to not only SBS 3D MOV or MP4 videos which is compatible with VR One in fast speed and excellent output quality, but also 3D videos in MKV, AVI, WMV for playback on specific display 3D devices. Plus, this Blu-ray ripping software entitles users to freely customize the output videos by changing video/audio parameters, trimming, cropping, adding video effect, inserting srt/ass/ssa subtitles freely.

Full Guide: How to watch 3D Blu-rays on VR One

Launch the best 3D Blu-ray to VR One Converter. Click the "Load file(s)" button to add 3D Blu-ray movie from BD drive to it. After the BD files are loaded, you can preview them on the right viewing window and take snapshots of your favorite movie scene if you want. 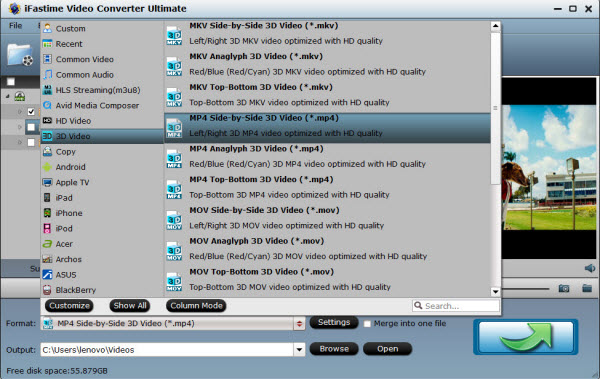 Click "Settings" button to do corresponding settings regarding to video, audio. Note that VR One compatible audio has to be encoded in AAC or MP3. AC3 audio and DTS Dolby don't seem to work. Plus, in this Profile Settings window, you can also select 3D Anaglyph and 3D Depth. 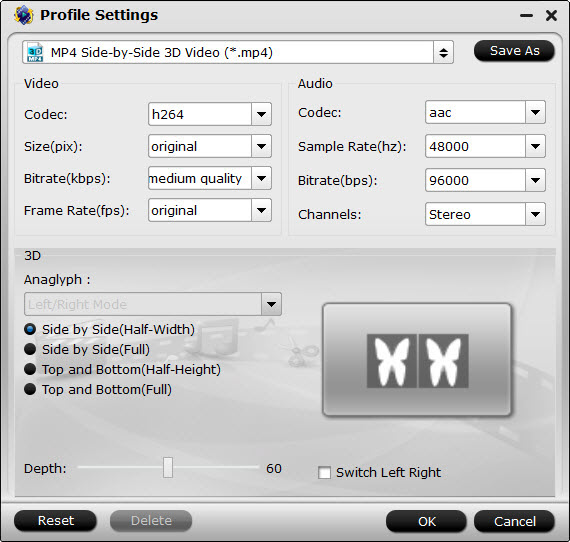 After you have done all the settings, return to the main interface to hit "Start conversion" button to start 3D Blu-ray to VR One converting process. When the conversion is finished, click Open button to get the output 3D videos.

Step 5. Add and view SBS 3D movie on VR One via iPhone/Android

The ZEISS VR ONE Cinema app enables you to enjoy your movies in an immersive environment with the lights off. Download it on the Apple App Store/Google Play and run it.

Transfer your movies to your iPhone

Transfer your movies to your Android phone

As you see, it is extremely easy to for 3D Blu-ray enjoyment on VR One in VR ONE Cinema without any hassles.

Notes: This 3D Blu-ray to VR One Converter can also help you to rip/convert DVD, DVD ISO/IFO to VR One for watching. And for movie lovers, it could also be your prime choice, which not only acts as an almighty video converter for transcoding MP4, Tivo, MKV, AVI, H.265 videos for playback on personal devices or players, completely satisfying your various video conversion demands. Anyway, facts speak louder than words. Just try!

Have more questions about how to watch 3D Blu-rays on VR One in VR ONE Cinema, please feel free to contact us>>