Samsung Gear VR provide you with the virtual cinema mode when you watch your own 3D movies with it through Oculus Cinema. Many 2D/3D movies online are downloaded with MKV format, though Gear VR claims to support MKV files, sometimes we still encounter no sound in MKV when playing with Gear VR on Samsung Galaxy Note 4/Galaxy Note 5/Galaxy S6/Galaxy S6 Edge/Galaxy S6 Edge+/Galaxy S7/Galaxy S7 Edge. Can old/new Gear VR play MKV files? Why Gear VR play some of the MKV videos but not others? Simply follow this article to get the reason and solution for "Gear VR doesn't support MKV DTS 5.1" problem. 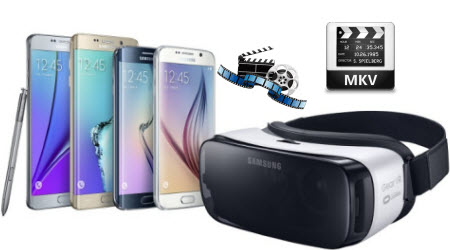 How to Solve Can't Play MKV on Gear VR

With it, you can convert all kinds of MKV files including 2D MKV, 3D MKV, H.265 MKV to Gear VR supported format like Top-Bottom, Side-by-Side 3D MP4 and MKV. Once you start the MKV to Gear VR conversion, you can soon get your output files cause its fast conversion speed. To enhance and personalize your movies like trimming, cropping, adding special effect, inserting subtitles are also allowed. In addition to converting MKV to Gear VR, it can convert other video formats to enables us to play AVI, WMV, FLV, VOB, 3GP, TS, RMVB, WTV, WebM, MPEG-1, MPEG-2, and etc on Gear VR via Galaxy Note 4/5/S6 (Edge/Edge+)/S7 (Edge). Mac version is here. Below will show a detailed guide on how to convert Gear VR unsupported MKV to Gear VR supported MKV or MP4 on Windows or Mac.

Part I. How to Convert MKV to Gear VR Video Format for Viewing?

Install and run the MKV to Gear VR Converter, click "Add video" button on the interface to load the MKV movies. With the function of batch conversion, you are here allowed to import more than one MKV video files for your 3D movie creating project.

Click Settings button to adjust video/audio parameters like video resolution, bitrate, audio codec, audio channel. Audio has to be encoded in AAC or MP3. According to other Samsung users' experience, anything over 720p does nothing but turn battery energy into heat, due to the screen resolution. You can also adjust 3D depth if you want.

Click the "Start conversion" button to start and finish converting the MKV to Gear VR supported format. Your conversion can be done for a short time on your computer, after that, you will easily open converted MKV via "Open" buttion. Now, equip your 3D glasses(like Gear VR) and start your theatric 3D experience at home! We'll be sharing more of these helpful tips and tricks in the coming days.

1. Place your video files into the folder named "My Videos" on your Built-in SD card or extra SD card.

2. On your MicroSD card file directory, navigate to Oculus > Movies > Your Movies

3. Create a new folder within "Your Movies" and label it "3D"

4. Import or move your side-by-side 3D videos into your newly created "3D" folder

Once you have created your 3D content folder and imported compatible video files, insert your MicroSD card into your Galaxy Note 4/Galaxy Note 5/Galaxy S6/Galaxy S6 Edge/Galaxy S6 Edge+/Galaxy S7/Galaxy S7 Edge, dock the phone in your Gear VR. Then:

1. Navigate to Oculus Cinema from the main menu
2. Navigate to "My Videos" from the Oculus Cinema content library menu
3. Select the 3D video you wish to view (if you followed the above steps it should have a "3D" label in the upper righthand corner)
4. Choose the cinema mode to begin playback

2016 looks like being a great year for 3D movies. Check out our selection of this year's biggest 3D movies (listed in release-date order) and let us know in the comments which ones you're excited about.

Have more questions about No sound on MKV (DTS 5.1) in Gear VR Solution, please feel free to contact us>>