Home Blog Apple iPhone 7 vs Samsung Galaxy S7, Which smartphone is the Winner?

Apple iPhone 7 vs Samsung Galaxy S7, Which smartphone is the Winner?

When it comes to the smartphone market, we will inevitably mention two eternal enemies: Apple and Samsung. Last year, iPhone 6S Plus vs Samsung Galaxy Note 5 stole most of the spotlight. Only a few month later, a round up of rumor specs for both the iPhone 7 and Galaxy S7 are starting to trickle out and iPhone 7 vs Galaxy S7 fight begin. In these Apple and Samsung smartphone battle, which will you vote for? Read this iPhone 7 vs Galaxy S7 specifications comparison side by side. 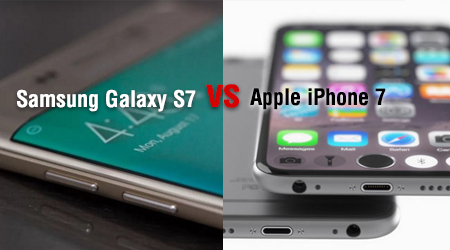 Apple is widely expected to ditch the standard 3.5mm headphone jack in its iPhone 7, a move that has triggered massive discontent among fans. Apple's decision to remove the headphone jack and include Bluetooth earphones comes as a way to make the iPhone 7 thinner. It is uncertain if Apple will implement such a massive change, but an online group have launched a petition against the removal of the headphone jack. The petition has received more than 210,000 digital signatures.

This could be a winning bet for Samsung, which has all the intentions to offer headphone jack in Galaxy S7. Will Apple fans ditch iPhones in favour of Samsung smartphones following the removal of the 3.5mm jack? Only time will tell.

The big news for iPhone fans is the iPhone 7 will probably get a higher resolution display, specifically a QHD one with a resolution of 2560 x 1440—as many Android handsets already have. This will match the resolution of the Galaxy S7. One thing that isn't clear is if Samsung will add some kind of 3D Touch-like pressure sensing display to the S7 that the iPhone 6s has now (something the iPhone 7 will retain).

But one thing is for sure, both devices are ideal to enjoy movies videos on. To watch all media contents on iPhone 7 or Galaxy S7, a proper smartphone video converter is needed.

The iPhone 6s received a major camera upgrade over the iPhone 6—getting a 12MP rear camera and 5MP front one. Don't expect any MP boosts in the iPhone 7 since Apple usually holds the MP for a few years. As for the Galaxy S7, expect similar camera specs: 12.2MP rear and 5MP front. Both will record 4k video.

Performance is going to be quite tricky here as both these Smartphone are made to perform really well. Samsung Galaxy S7 series will have either snapdragon 820 or Exynos 8890 in-house processor with 4G RAM configuration. We have already seen Galaxy S7 benchmarks last year and its dam good. At the other hand there is no certain leak but Apple iPhone 7 will have A10 processor made by TMSC and will run with 3 or 4GB RAM configuration.

Samsung is expected to upgrade the battery pack in its Galaxy S7 and S7 Edge to 3,000mAh and 3,600mAh, respectively, according to Forbes. Comparatively, the Galaxy S6 features a 2,550mAh and the Edge variant packs 2,600mAh unit. Earlier reports also suggested the new phones would get fast-charging technology for convenience.

As for the iPhone 7, Apple's flagships will also reportedly have bigger batteries. Earlier this month, a report suggested the iPhone 7 Plus would feature a 3,100mAh battery. There was no indication whether the 4.7-inch variant of the iPhone would also get a bigger battery, but it is still too soon to predict.

The source that talked of a bigger battery in the iPhone 7 Plus also revealed there would be a 256GB variant of the iPhone 7 Plus. It would make more sense if Apple could increase the storage on its 16GB variant. We'll just have to wait to find out.

Rumors about Samsung Galaxy S7 have pointed to the return of the microSD card slot several times. If true, fans will be happy to upgrade. The expandable memory option was removed in the Galaxy S6 series.

iPhone 6s runs new iOS 9 unveiled at 2015 WWDC that embraces new features, including improved stability. It's an easy guess that iPhone 7 will ship with this new iOS. A new look Siri yet with enhanced security can be seen on the new iPhone. Galaxy S7 on the other hand, is also rumored to pair with the new Android 6.0 M OS rather than the current Android Lollipop. The Android M 6.0 is expected to arrive with improved notification features as well as Android TV and Android Auto support.


iPhone 7 vs Galaxy S7: Side by Side Comparison

So, till now we have checked both devices over their display, camera, performance,price metrics, etc. and have rough understanding of the differences between the two devices. Maybe it's too early to figure out which is the better smartphone in iPhone 7 vs Galaxy S7 fight, but one thing is for certain, supported video formats for iPhone 7 and Galaxy S7 are limited, bringing great inconvenience in video playback.

With the aid of iFastime Video Converter Ultimate, no matter what you'll buy, be it iPhone 7 or Galaxy S7, you can watch any blockbusters in Blu-ray, DVD, MKV, AVCHD, AVI, MP4, WMV, MOV, FLV format from online store, torrent Movie Download Sites or cameras on the move, thanks to the converter's ability to rip Blu-ray/DVD and videos to iPhone, Android supported video formats with original quality kept. More incredibly, it can created playable 3D videos for watching on VR headsets via your iPhone 7 or Galaxy S7.

See how to compare Samsung Galaxy S7 vs Apple iPhone 6S (7) on YouTube:

2 thoughts on “Apple iPhone 7 vs Samsung Galaxy S7, Which smartphone is the Winner?”