If you miss the films for theatrical release, when these films come out on Blu-ray, watching Blu-ray movies on Samsung Galaxy Note 5 time after time is more comfortable, even. Here, I've gathered the specifications about Galaxy Note 5, and bring you detailed gudie to rip Blu-ray to Galaxy Note 5 readable format in a snap for you to check out. 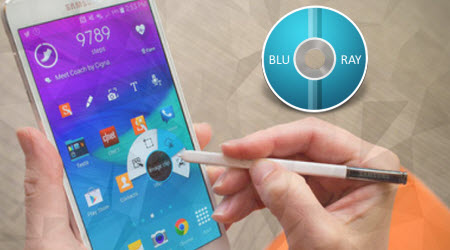 According to cnet.com, Samsung's Galaxy Note 5 is the smoothest, sleekest stylus-equipped jumbo-screen smartphone that the company has ever made. It's been tipped that the Note 5 will feature USB-C support, ePoP memory, 4GB RAM, Exynos 7422 processor, an Edge-style spin-off, and Google's new Android M operating system. Other purported specs on this device include the adaptive 5.7″ Quad HD Super AMOLED 2560×1440 resolution display.

Since it is quite pleasant to enjoy visual feast brought by fantastic Blu-ray movies, and attributing to the super AMOLED display, Galaxy Note 5 cannot be too good to watch Blu-ray movies thereupon. Nonetheless the down side is any phone is not big enough to hold any Blu-ray disc, leaving a lion in the way if you want to watch Blu-ray movie on Galaxy Note 5 directly. But this doesn't mean you cannot achieve this goal. There are silver linings. You can rip Blu-ray to Galaxy Note 5 viewable video format beforehand so as to access your converted movie to this hot gadget limitlessly. With a piece of high-end Blu-ray ripper software, this Blu-ray to Galaxy Note 5 conversion task can be completed.

Here iFastime Video Converter Ultimate brings a perfect solution to rip and convert any blockbusters on Blu-ray: Big Game, Big Hero 6, Avengers 2, Impossible Mission 5, Skin Trade, Home, etc. to Galaxy Note 5 playable formats with original quality kept in a few clicks. The sticking point is that this tool allows Samsung followers to rip Blu-ray to Galaxy Note 5/4/3, convert Blu-ray to Galaxy S6 Edge+/S6 Edge/S6/S5 and other Samsung gadgets Including, but not limited to Samsung Galaxy Tab, Note, S-series. effortlessly with intact quality. This program is especially designed for Windows users (Windows 10 and 8.1/8 included). If you're a Mac user, pls get iFastime Video Converter Ultimate for Mac. Then follow the steps below to rip Blu-ray to Galaxy Note 5 playable videos in a few clicks! The below guide takes iFastime Video Converter for Windows screenshots for example.

First, insert a Blu-ray disc into the Blu-ray drive, back to the software interface and click the upper "Load file(s)" button. Then it flashes right to you preloading the Blu-ray content. And you'll notice that among the several titles there's a title ticked off. It is the main movie. You wouldn't have to consider other titles. BTW, the load of Blu-ray folders and ISO files from your hard drive is also available. After the movies are loaded, you can preview them on the right viewing window and adjust volume or take snapshots freely. 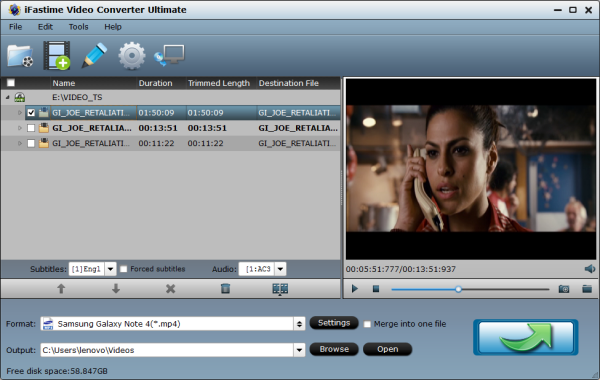 Press the "Format" drop-down menu and then select a video container format that the Galaxy Note 5 supports like MP4, WMV, AVI, etc. You can also select "Samsung Galaxy Note 4(*.mp4)" from "Samsung" category to get videos with optimized settings for playing on your Galaxy Note 4 as well as Galaxy Note 5.

From Samsung Official Website, we learn some important technical specifications for Galaxy Note 5 as follows: 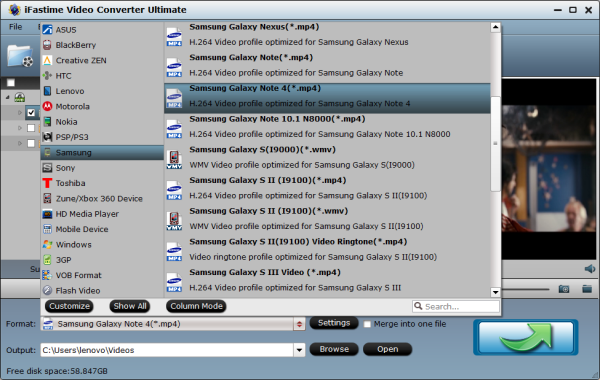 After that, click the "Settings" button to adjust the output parameters including "resolution", "bitrate", "frame rate", and "encoder" to make the output video play best on your Galaxy Note 5. It is claimed that Galaxy Note 5 supports up to 30fps frame rate and video bitrate: up to 1.5Mbps for H.264, up to 2.5Mbps for MPEG-4. 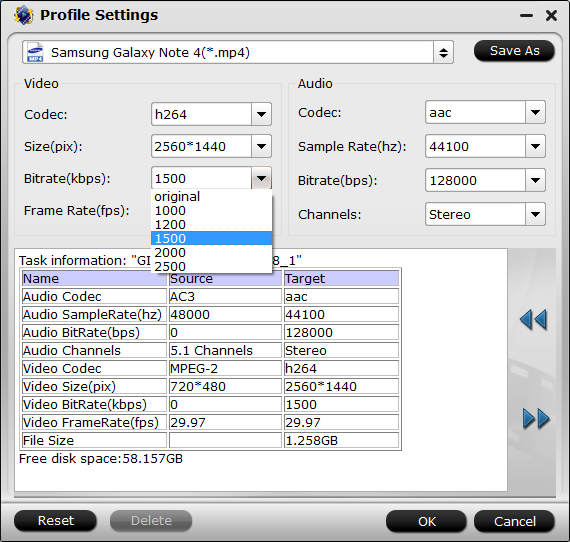 Click "Start conversion", and this program rips Blu-rays to a Galaxy Note 5 compatible file format. What surprises me is that the Blu-ray copy was without flaw, almost without loss of quality. After the conversion, click "Open" button and check the output Blu-ray movie on your computer. To watch Blu-ray movies on Galaxy Note 5, just connect your Galaxy Note 5 to computer using the cable and do transferring. Just enjoy your Blu-ray-on-Note-5 time!

iFastime Video Converter Ultimate is an all-in-one video toolbox in ripping Blu-ray/DVD/Videos for playback on iPad, iPhone, Galaxy devices, HTC, Kindle Fire HD(X), Google Nexus series, PS3, Xbox, Gear VR, VR One, etc. Therefore, you will be not restricted by your device you have in watching Blu-ray/DVD or 2D/3D movies.

Have more questions about how to rip Blu-ray collections for playback on Galaxy Note 5, please feel free to contact us>>