Pixel C is a high-end upcoming tablet to hit the market in the holiday bracket this year. With a perfect partner keyboard, the Pixel C was pitched at productivity, which sends it head to head with one of the best tablets we've seen in 2015: the Sony Xperia Z4 Tablet. To understand both the devices, we provide you with an in-depth feature-by-feature comparison of Sony Xperia Z4 Tablet and Pixel C. 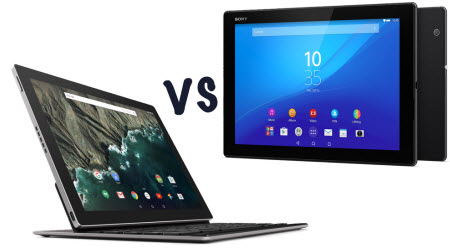 The Google Pixel C features an anodised aluminium build and measures 242 x 179 x 7mm, while the Sony Xperia Z4 Tablet measures 254 x 167 x 6.1mm and comes with an aluminium frame and a plastic build. The Sony is slimmer and smaller in height than the Pixel C, due to the different display size, but the Google tablet isn't as wide and it offers a more premium design, even if it isn't waterproof like the Sony.

The Xperia Z4 is a lot lighter than the Pixel C however, hitting the scales at 389g compared to the Pixel C's 517g weight. It also comes in black and white colour options, offering users the choice, while the Pixel C is only available in silver.

Sony opts for the standard Micro-USB when it comes to charging the Xperia Z4 Tablet. Google on the other hand, has gone down the USB-Type C route which allows for faster charging and data transfer, also offering reverse charging, so you can use it to recharge your phone.

In reality the difference in ppi doesn't amount to anything visible. Both have excellent displays, both are packed full of detail and offer punch and vibrancy to colours.

The big difference is in the aspect. The Sony wastes less space watching movies in landscape, but the Pixel C offers more vertical height when working, also offering a better aspect for portrait use. Of the two, we'd pick the Pixel C.

The Google Pixel C features a 8-megapixel rear camera and a 2-megapixel front camera. The Sony Xperia Z4 Tablet has an 8-megapixel camera too but it ups the front-facing snapper to 5-megapixels.

It isn't just about megapixels when it comes to how well a camera will perform as the processing power has a lot to do with it, but the extra resolution helps, especially when it comes to the front. We aren't huge fans of taking pictures with a tablet so the rear camera capabilities don't bother as as much as the front, which we use often for video calling.

We weren't overly impressed with the cameras on the Pixel C, they are adequate rather than exciting, and that's not too different to the Sony Xperia Z4 Tablet.

The Google Pixel C is one powerful tablet, sporting the Nvidia Tegra X1 processor under its hood, Maxwell graphics and 3GB of RAM. The Sony Xperia Z4 Tablet is a good performer in terms of power however, featuring the Qualcomm Snapdragon 810 processor and Adreno graphics, also supported by 3GB of RAM.
In terms of storage, the Pixel C offers 32GB and 64GB internal memory options but there is no support for microSD expansion. The Xperia Z4 Tablet on the other hand offers 32GB of storage only, but it comes with microSD support for storage expansion up to 128GB, which once it gets updated to Marshmallow, can be used as traditional storage.

The Pixel C is a pure Android tablet, landing with Android 6.0.1 Marshmallow, the very latest that Google has to offer. The Sony Xperia Z4 Tablet, by comparison, comes with Android Lollipop, awaiting an update.

The big difference, however, is in the additions that Sony makes. Sony customises many aspects of the software experience, adding plenty of additional apps, and switching things over to its own services, in some cases duplicating what you'd get as standard from Google.

We prefer the Pixel C's pure approach, as it leaves you free to make your own decisions in a clutter-free device, especially if the primary use will be productivity.

On the other hand, Sony enhances the media experience, adding more connectivity, as well as fun options like PS4 Remote Play, for a little console gaming on your tablet.

Both the Pixel C and the Sony Xperia Z4 Tablet have productivity in mind, with Sony's tablet coming with the keyboard bundled in the box. The Pixel C Keyboard, however, is a £119 accessory, although it's better conceived and executed than Sony's keyboard.

The Pixel C uses magnets to attach the keyboard, rather than the slightly chunky attachment solution that Sony has opted for. This leads to a more stable tablet as there's more support to the rear.

However, Sony's keyboard has a huge advantage: it comes with a trackpad, allowing for better navigation of the tablet without having to touch the display.

The Sony Xperia Z4 Tablet costs £449 all in, which makes it cheaper on the whole than the Pixel C but you don't have the option to buy it without the keyboard meaning if you want a tablet just for movie watching for example, it is pricey.

Another big difference between Google Pixel C vs Sony Xperia Z4 is regarding the media format for these two Android flagship tablets.

Certainly, figuring out Google Pixel C and Sony Xperia Z4 supported video/audio file formats is the best way to get out of video format compatibility issues, together with converting unsupported videos to these Android tablets video formats with a video converter for fluent playback.

iFastime Video Converter Ultimate - If you want to fast rip Blu-ray/DVD to Google Pixel C/Sony Xperia Z4 formats supported at one go, or if you decide to convert all your video collections (SD, HD and 4K UHD) to Google Pixel C/Sony Xperia Z4 and maintain the original high quality in the meantime, this would be your assistant. Get 20% OFF specials at this Christmas season. 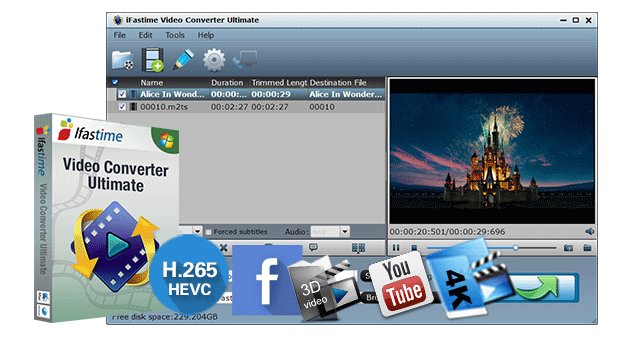 The Google Pixel C and the Sony Xperia Z4 Tablet are both excellent tablets that deliver in many areas. The design of the Pixel C is more exciting and it offers the latest when it comes to connections but you gain weight and thickness, while losing waterproofing.

Both are powerful tablets but the Pixel C takes the win when it comes to display, even if both are excellent in reality. Sony wins a few points back when it comes to storage however, offering microSD support and it also wins hands down on battery life.

Sony plays to its strengths in entertainment, with the Xperia Z4 Tablet having a range of extras to keep you entertained that you won't find on the Pixel C. However, if you're main interest is working on the move, the pure approach of the Pixel C might suit you better. Both are excellent tablets, but we feel that the cheaper £399 price for the Pixel C will attract many and the performance and design justifies the price.