Christmas brings you a peaceful end of the year and a happy start. After the parties, watching a Christmas movie with kids and family is such a wonderful thing! And to continue our Thanksgiving movie 2015 recommendation list, here we would like to share best Christmas movies for December 2015, the ones that acknowledge the joy and exuberance of the holiday season and its anxiety and stress. 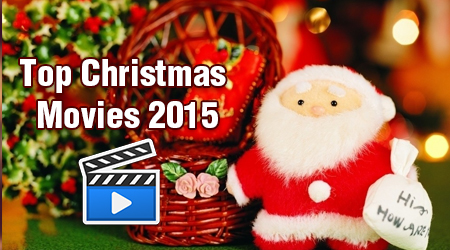 3. In the Heart of the Sea （Adaptation）

5. Alvin and the Chipmunks: The Road Chip (Animation movie)

Go to the cinema and make yourself lost in the visual feast with these 2015 Christmas Blockbusters! Remember to get your ticket as soon as possible before watching blockbusters on Christmas day.

YouTube, Netflix, Hallmark Channel provide many hot new 2015 videos Christmas movies for you to stream online. But if we can free download these movie for offline playback on PC or mobiles, families can get together to watch them on Christmas holiday 2015 or during a trip, even no internet connection available.

Building your own Xmas film library is much more convenient for enjoy them on iPad Mini 4, iPad Air, iPhone 6S, Surface devices, Samsung tablets and phones, etc. on the go. At this moment, iFastime Video Converter Ultimate is ready to help. This software enables users to convert downloaded video files to the video formats for playing anytime anywhere on any device, and it converts the video without quality losses.

Above 2015 Christmas movies for family are very delectable. Thus, many people want to include them into their Blu-ray/DVD movie collections. Owing to some drawbacks of BD/DVD discs, people tend to backup Blu-rays and DVDs to hard drive as multimedia formats. Backing up discs, including copy protected one, can never be a difficulty if you get powerful Christmas Blu-ray/DVD backup software, like iFastime Video Converter Ultimate, which features:

Have more questions about top Christmas Movies and TV Shows 2015, please feel free to contact us>>