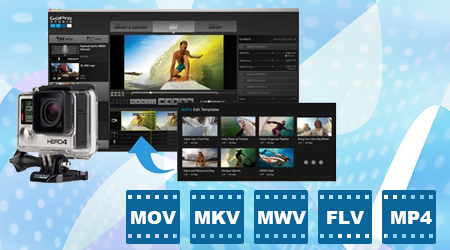 As one of the main products that are provided by the GoPro, GoPro Studio software has made all the things easy to do whether it is importing the GoPro media, playback videos, viewing videos/photos, creating professional quality videos, speeding it up or slowing it down, crop, and making image adjustments (like removing the fisheye lens distortion, or adjusting color or contrast)

About Editing Videos in GoPro Studio:

1. Import and convert files for the project

First, you have to import the video files you recorded. To do this, open GoPro Studio and click on the blue Import new files button in the top left corner. Choose the files you want to include and hit Open. 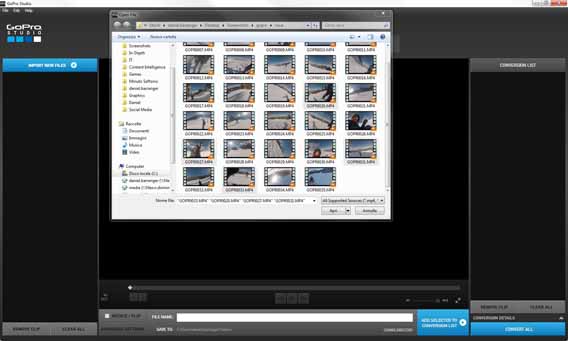 Before you begin assembling the video, you can already start cutting any unnecessary sections that you want to delete. Click on one of the thumbnails in the left column and then on Play, in the bottom center, to start watching the clips.

On the left you'll see two play buttons: you can use these to select sections of the file that you want to keep. The one on the left will determine the beginning of the clip, while the one on the right sets the end of the clip. You can choose several clips for one single movie. 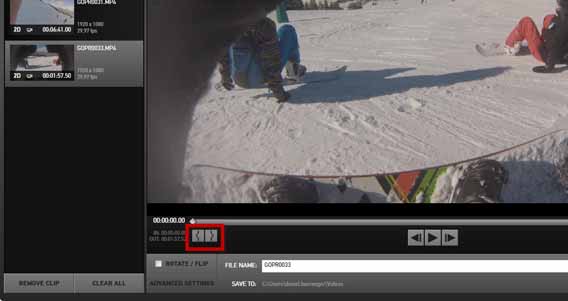 Select segmentsUse the Advanced settings button to change the video settings. You can choose the video size and frames per second, increase the speed of the video, change the format, adjust the quality, or remove the "fish eye" effect typical of GoPro videos. Select the last option, Remember Settings, to make sure that the program will remember the settings you've chosen for the next video you want to edit. Press OK. 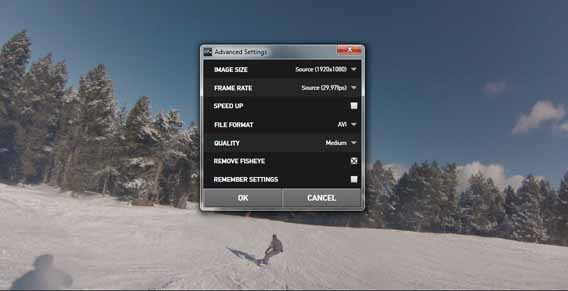 To move the video to the conversion list, click Add Clips to conversion list (1) in the bottom right of the screen. Repeat these steps for all the videos you'd like to add, although you can go back and add more videos during the editing phase by pressing on the Import & Convert tab at the top. When you're done and your video files have been added to the right column, click on Convert to (2) below. 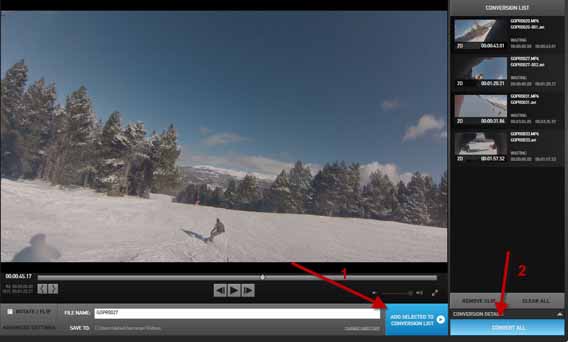 When the videos are ready to be converted, the Proceed to step 2 option will appear at the bottom right of the screen. Click it to move on to the next step.

Next, add the video. Select the video you want to import first, and again drag and drop it to the timeline next to the clip you added earlier. In the right column, you can adjust various parameters such as the speed of the video, the duration of the fade, the audio levels, white balance settings, and the frame. At the bottom, there are also presets to give it a vintage or night vision feel.

When you've finished editing the video, all you have to do is export it by clicking on the Export tab. Next, a window will open, where you can choose which video format you want to export it to. There are lots of video types, each suitable for different needs and devices. 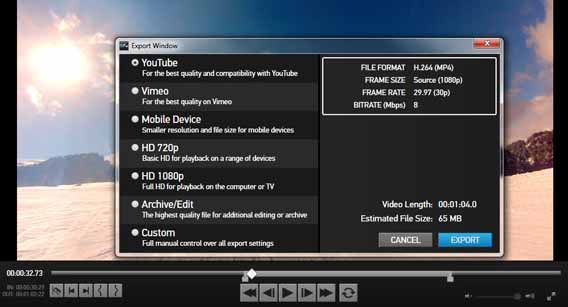 If, for example, you want to upload it on to YouTube, you have to choose the first option. If you want to see it on your computer or project it onto your TV at home, you need to select 1080p HD . Through the Custom option, you can set the parameters that you want. Once you've decided on them, hit Export.

Tips: If you files you want to add are not yet in the Media Bin, follow these instructions:

Before editing any videos in GoPro Studio, you may ask "What Type of Media Files Can I Add to a GoPro Studio Project?"

According to GoPro Studio support website, GoPro Studio has strict requirements of video formats, it only supports

The following formats can be imported into "Step 1: Import & Convert" and converted into GoPro CineForm files for use in "Step 2: Edit".


And as we can see, GoPro Studio does not support the video formats mentioned in the title, which are AVI, MKV, WMV, FLV, RM, MPG and some MP4 or MOV videos.

Below tips will explains why your video file might not be importing properly into GoPro Studio.

Make sure that you are not trying to import the footage directly from an SD card. First copy the files to a folder on your computer.

This is why we always have GoPro Studio issues while editing or converting GoPro footage : won't import videos, crashes, can't output files...  Then how to edit those incompatible videos in GoPro Studio?

To solve this dilemma, you need to take a little up front time and set up a workflow that will convert your video into a more editing-friendly format, such a GoPro Studio's MP4 or MOV. iFastime Video Converter Ultimate is the solid tool to help users make the Video to GoPro Studio transcoding on Windows PC (Windows 10 included).

This program features high efficiency and seamless conversion. With it, you can transcode AVI, MKV, WMV, FLV, RM, MPG and some MP4 or MOV video to GoPro Studio compatible MP4 or MOV format. Besides, its also exports advanced encoders like AVI, MOV, MPEG-2, DNxHD, etc. allowing you to convert video to seamlessly fit Adobe Premiere, Avid Media Composer, Windows Movie Maker, Pinnacle Studio, PowerDirector, etc. If you're editing Videos in GoPro Studio on Mac, try iFastime Video Converter Ultimate for Mac. If not, download it from below:

How to convert and import videos to GoPro Studio

Install and run the Video to GoPro Studio Converter on your computer, then click "Add Video" button to browse and load your rvideos which you've transferred to your Windows PC. 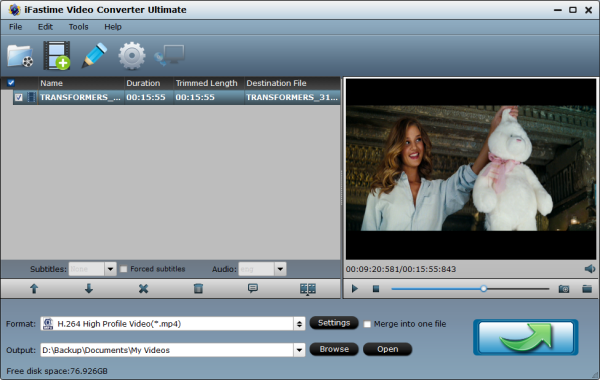 Note: Batch conversion is supported, so you can load more than one file to save time. You can also combine all the files together with this software.

Click Format bar and choose your desired format. To add videos to GoPro Studio, you can choose to .mp4, .mov, etc compressed format from "Common Video" or "HD video" as the target format. 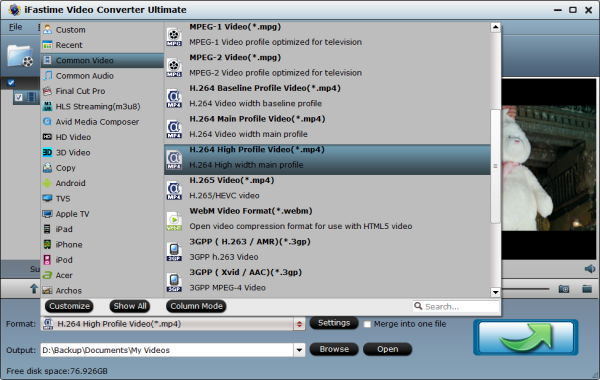 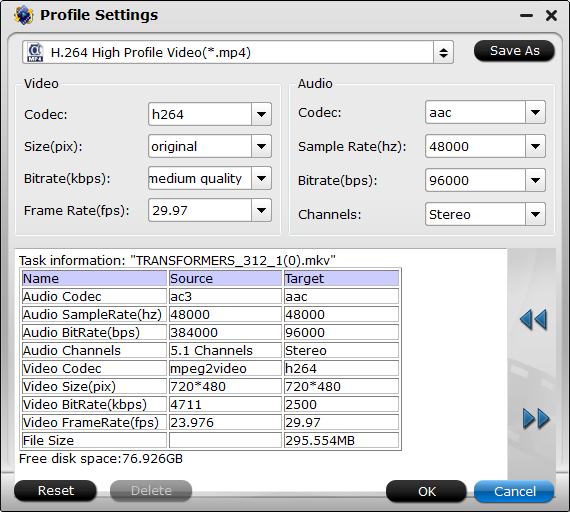 After all necessary settings, hit the "Start conversion" button to start the video to GoPro Studio conversion. Once the conversion process shows in 100%, click "Open" to get the output videos. Create a project and start editing your Videos in GoPro Studio with light speed. Nothing could be simpler or more immediate.

Video Tutorial -How to Get MOV, MKV, WMV, FLV, MP4 into GoPro Studio

Have more questions about how to solve GoPro Studio won't import videos files on Windows/Mac, please feel free to contact us>>