Maybe you have got a 4K camcorder and chances are that you have taken up the instantaneous which the camcorder pats to like when traveling with your friend or family and you want to get all your recorded 4K videos into Sony Vegas Pro 11/12/13 for editing. To get the job done, you may have to put your 4K files into right format/resolution that's compatible with Sony Vegas. Keep on reading to learn details. 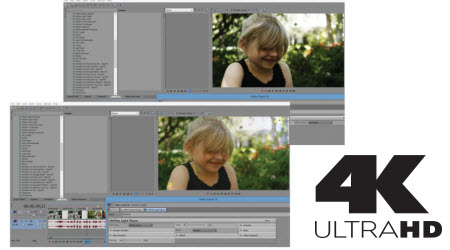 Although Sony Vegas Pro 12 and the latest version Vegas Pro 13 announced that they support a complete 4K workflow when you're working with 4K XAVC and XAVC S, people still encounter many problems when importing 4K videos to Sony Vegas for further video editing.

To eliminate this confusion, first we should check out the roundup of 4K Video File Formats:

2. MTS/M2TS: MTS/M2TS is a file name extension used for the Blu-ray Disc Audio-Video (BDAV) MPEG-2 Transport Stream (M2TS) container file format. This container format is commonly used for HD video on Blu-ray Disc and AVCHD. MTS is developed by Sony and Panasonic together as the recording format for the HD camcorders, commonly the 4K video recorded by the trending Sony, Canon, Panasonic 4K cameras or camcorders is in MTS format.

5. MKV: MKV (Matroska Multimedia Container) is another 4K video file format with HEVC/H.265 codec. It is an open standard free container format that can hold an unlimited number of video, audio, picture, or subtitle tracks in one file. In other words, it is a multi-track video file format. Microsoft Windows 10 has already added native MKV and HEVC codec support, so you can play your recorded or downloaded 4K videos on Windows 10 PC now.

Though Sony Vegas Pro 12/13 can be taken as native 4K XAVC editor, it refuse to read other 4K video formats like 4K MTS/M2TS, 4K MXF, 4K AVCHD, 4K MKV, which are excluded from the Sony Vegas compatible format list.

Worse still, working with 4K files can be taxing on your computer, especially if you don't have the most powerful machine to edit on. From our tests it looks like Sony Vegas Pro 12/13 has to create a lower resolution proxy file to display in the NLE while you edit, so you have to wait for the proxy file to be created before you can edit any 4K footage. In this process, it will cost some time.

In order get rid of the trouble that some 4K videos won't be edited with Sony Vegas Pro 11/12/13, you are here offered with two easy methods to let Sony Vegas work with 4K videos as below.

Part 1. Setting up the Project

If you have a compatible graphics card installed, you can use it to help speed up your rendering time and offload some of the process from your CPU. Click Options and select Preferences from the bottom of the menu.

You can open this window by clicking the Project Properties button above the preview pane, or by clicking File → Properties. This will open a new window which will allow you to adjust all of the details of your project.

At the top of the Video tab, you will see a Template drop-down menu. There will be a large list of templates to choose from, but if you are rendering in 4K there are only a couple you need to pay attention to.

If you are rendering 1080p video, you will want to change the field order for your frames. Click the "Field order" drop-down menu and select "None (Progressive scan)". This will result in smoother video.

After selecting your template, look for the "Full-resolution rendering quality" drop-down menu. Ensure that it is set to "Best".

Most modern digital footage is shot in progressive mode, so there is no need for deinterlacing. Click the drop-down menu and select "None". Any other method could result in unwanted scanlines in the final video.

This will help reduce the chance of small black bars appearing around the edge of your finished product.

Once you are finished configuring your custom template, you can save it for easy access later. Enter in a name to help you remember it into the Template field, and then click the Save button. Your custom template will be added to the list, allowing you to quickly select it again.

Here you can adjust your audio settings for your project. There are a few things you'll want to check in order to ensure the best-sounding video possible. 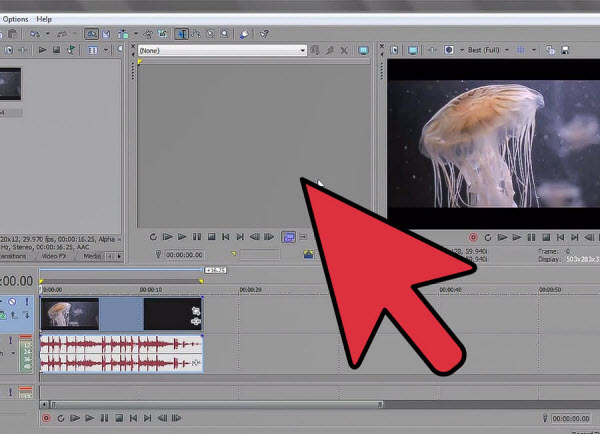 Now the your project properties have been set, you can choose how you want to render it for the final product. You can find the "Render As" button in the toolbar or in the File menu. 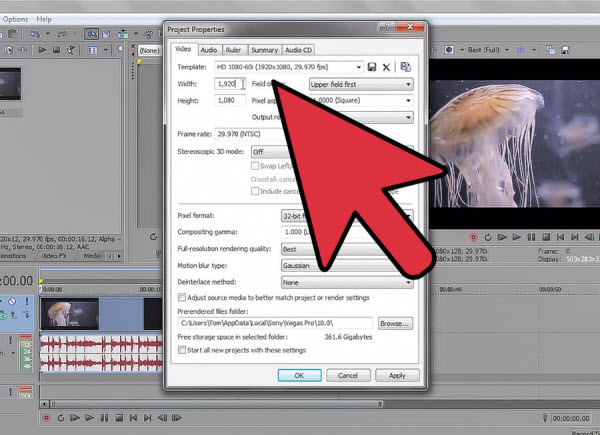 In the "Render As" menu, you will see a list of available formats in the Output Format section. There is a lot of discussion about which formats work best, but in general there are three formats that are considered the best for 4K video: 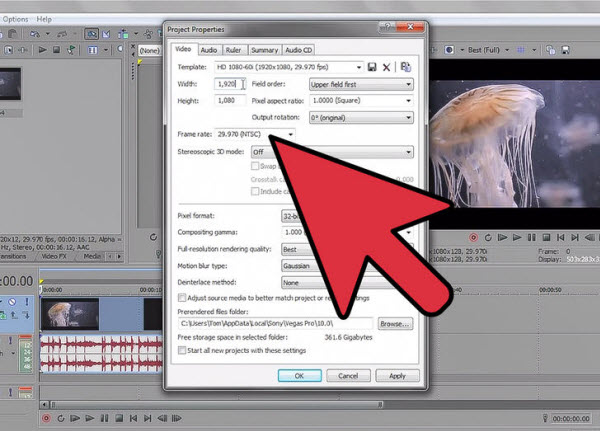 3. Expand the format you want to use.

For example, if you want to use Main Concept, expand it to display all of the different templates available under that format. Choose the one that matches your video the best. 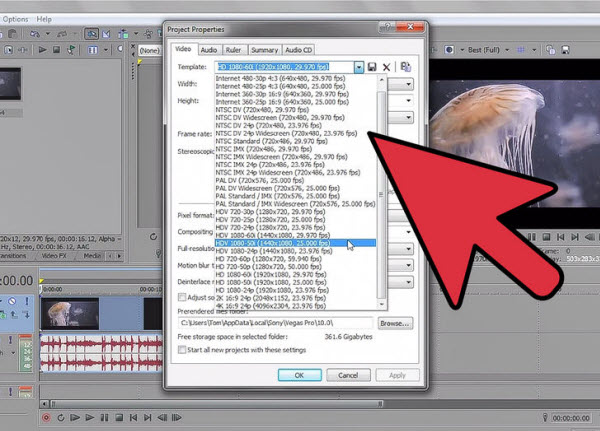 Click the "Customize Template" button to open a new window with all of the template settings. Note: This is different than your Project Properties template, and the following settings apply to MainConcept only. 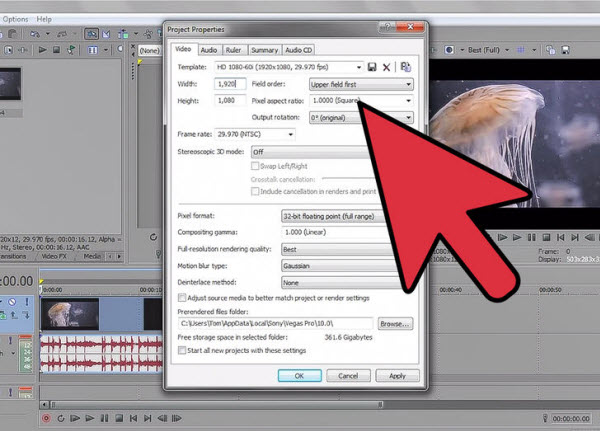 Once you've set all of your rendering options, it's time to start processing the video. Click the Render button at the bottom of the "Render As" window to begin the process. A progress bar will appear, and you will see the frame counter beneath the preview window advance as the rendering occurs.

Warnings: It takes up a lot of resources to render in 4K, so make sure not to open other programs up, or they'll most likely crash. (See more info)

Since you may easily have crashing issues during render, any small change you make will make the render process be ended, so you need to re-render. Then render again...and again...and again, while you are working. So another better solution we offered to you is to do 4K to Sony Vegas conversion before you edit.

You can use the best 4K video converter- iFastime Video Converter Ultimate. It saves you both the rending time and annoying incompatible format/codec issue. And all you need is to drag the 4K videos, choose Sony Vegas video format and start 4K video conversion for Vegas Pro. With it, you can transcode 4K video to WMV for easy importing to all versions of Sony Vegas (Vegas Pro 10/11/12/13). Not just 4K videos, this powerful video converter also can convert other SD/HD videos including MP4, MOV, AVI, FLV, MKV, VOB, Tivo, DivX, Xvid, MXF, MTS, XAVC, etc to Sony Vegas Pro, Pinnacle Studio, Windows Movie Maker, PowerDirector, Avid Media Composer, Adobe Premiere Pro and more NLE supported format on Windows (Windows 10 included). What's more surprising is that it can offer many personalized editing functions to edit the 4K videos before or after the conversion. Follow its step-by-step instruction below to learn how to encode 4K video files to WMV for Sony Vegas Pro. 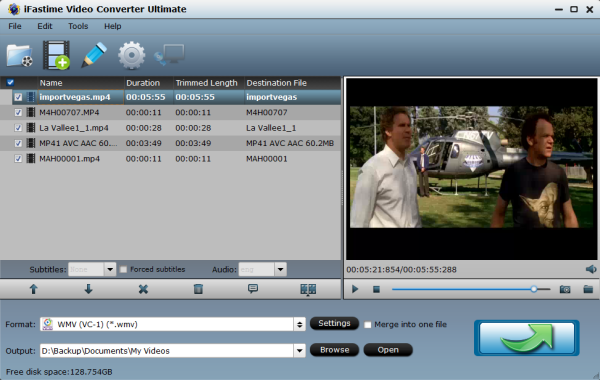 Get the dropdown menu besides "Format" and then move your pointer to "Adobe Premiere/Sony Vegas> "WMV (VC-1) (*.wmv)" as the output format from the profile list which is the Sony Vegas Pro compatible video format. You may also select Sony Vegas supported MPEG-2, AVI or MOV. 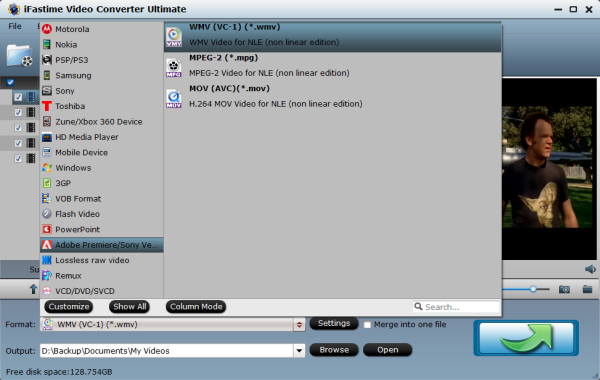 Tip: You can adjust the video and audio parameters, including the Bitrate of Video & Audio, Video Size, Frame Rate, Audio Channels, etc., by clicking the Settings button on the main interface. Generally speaking, you may need to decrease bitrate to make smaller output video size.

Click the "Start conversion" button, the 4K video converter will start encoding 4K files to Sony Vegas Pro immediately. After the files are converted, tap the Open button to locate the converted files and bring them into Vegas Pro with best audio and video quality, edit, export or share.

And also the following questions will be solved at ease:

Vegas 12 refuses importing some of my 4K files, how to solve this?
Why can't open 4K videos into Sony Vegas? Is there some tool to help make it?
How to import my 4K footage to Sony Vegas 13/12 for editing?
Any recommended 4K to Vegas Pro video converter? I tried many converters but none of them gets the converting work done.

Have more questions about how to import 4K videos to Sony Vegas Pro 11/12/13, please feel free to contact us>>